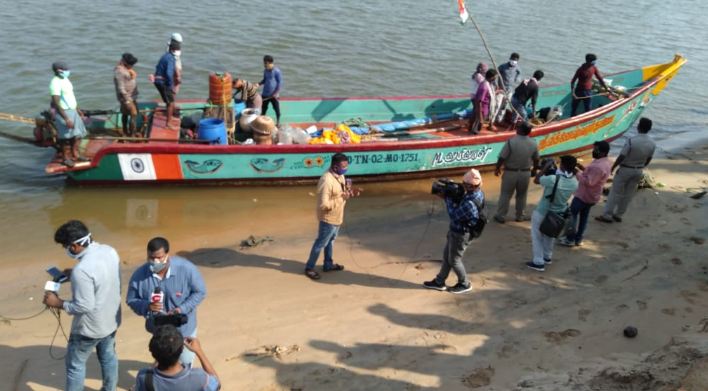 Chikiti: Thirty-six Migrant labour returned by boat from Chennai . Many Dadan workers in Ganjam district, who were stranded in Chennai after the Lockdown downhill, are returning home by dangerous waterways. Thirty-six people arrived on Saturday, while 39 others arrived by sea from Chennai by boat on Monday. At around 3pm, the boat capsized at the mouth of the Chikiti block of Ramayapatna. There were 12 workers from Ramayapatna, seven from Patisunupur, six from Rangeilunda block and four from Andhra Pradesh, while four others fell off the road, said Harprasad Bhoi, a Chikiti tehsildar. They bought a motorized boat for Rs 40,000 and left Chennai by sea on the 23rd. The Andhra Pradesh border town of Palasa and Kabetti were informed by villagers that they had run out of diesel. Later, some villagers arrived at the scene in another boat carrying diesel. After filling up with diesel, two boats left the area and reached the mouth of the Ramayapatna on Monday afternoon. Earlier, Berhampur sub-district magistrate Sindh Dattatrai Bhau Saheb, Chikiti tehsildar, Bido Falguni Majhi and Golanthara and Marine police arrived at the mouth of the Ramayapatna police station. All Dadan will be kept at the Quarantine Center in Ramayapatna village after undergoing medical check-ups, administrative officials said.