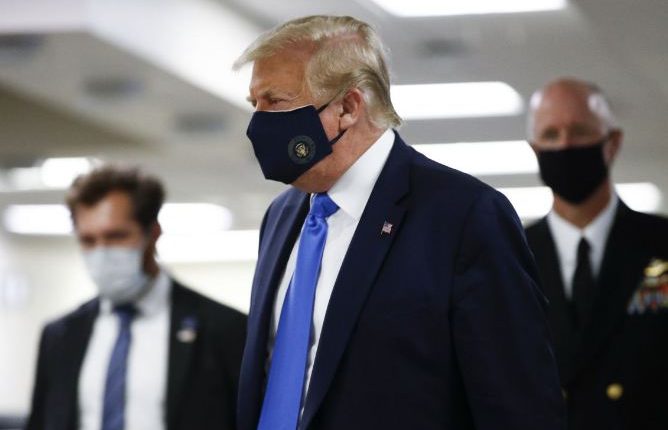 Trump flew by helicopter to the Walter Reed National Military Medical Center in the Washington suburbs to meet with veterans of the armed forces and health care providers for Covid-19 patients. “I think it’s important to wear a mask, especially when you’re in the hospital,” he told reporters as he left the White House.
He did not wear a mask until he got off the helicopter and went to Walter Ridge Hospital. But, Walter was wearing a mask inside Ridge’s hall.
Shortly after the outbreak, President Trump wore a face mask. Due to the spread of the coronavirus in the United States since last March, 3. It has infected 2 million people and killed at least 137,000 people. Provincial governors, including Vice President Mike Pence, have been urging everyone to wear face masks as a precautionary measure.

But at a press conference, the Coronavirus Task Force Update, a rally, and other public events, Trump refused to wear a face mask. People close to the president told the media that he feared that Facebook would make him weak. In addition, his focus on Facebook will divert attention from the financial recovery to the public health crisis.

But it is unknown at this time what he will do after leaving the post.