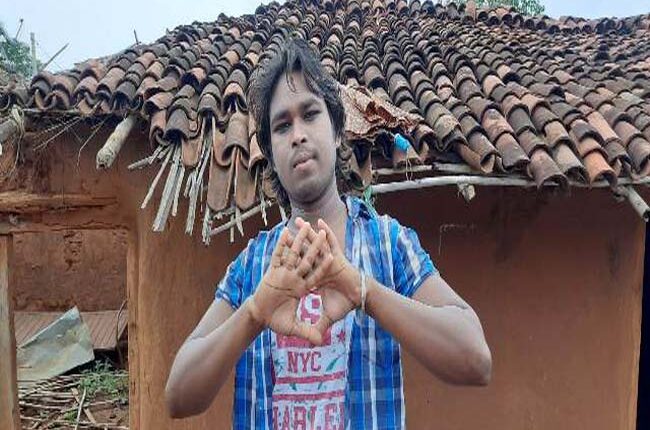 Bhawanipatna: Everywhere you look today, the tide of protectionist sentiment is flowing. Its quality cannot be stopped by the poor, the poor. Talent is never hidden. No matter how bad the situation may be, if a firm goal persists, the hard work of a friend will make the talent flourish one day or another. That talent has a unique identity and recognition in the public mind. One such niara, Khiali and genius is Duleshwar Thandi, son of Pramila Thandi of the Borda village in Bhawanipatna block of Kalahandi district and the late Neelmani Thandi, who is best known today on social media as ‘Rapper Dule Rocker’. Duleshwar did not give up in spite of the shortcomings, antonyms and repeated frustrations. Duleshwar enrolled in Bhawanipatna Autonomous College in 2009 after primary education at Borda village school in Bhawanipatna block. After three years, the mother moved to Raipur, a neighboring state of Chhattisgarh, to raise money for her mother’s illness. After working in Raipur for a few days, his father suddenly contracted paralysis in Nikanchal and died in 2016. He was living with his mother in need. However, he has now created a new identity for his talent. Now he is known everywhere as the rapper Dule Rocker. Nine Steps is presenting with Raphael about the injustices, atrocities, government negligence, and poverty and deprivation that he has always seen and experienced. In each of his songs, he has been able to present a realistic picture of the current state of society. Father Chheund’s unemployed Dule is also known as the rapper of Khapar’s house. He has revolutionized the country’s system, poverty, and social unrest through his rap. Popular singer Odisha singer Humanju Sagar has extended a helping hand to her after she came to the forefront of the media. While her mother was receiving widows’ allowances from the government, she was given a house in the Prime Minister’s Housing Scheme, and she was receiving gas under the Ujwala scheme, but she did not receive any help from the state government. Although he holds a bachelor’s degree in science, Duleshwar has struggled in Raipur, Chhattisgarh, as a hotel boy and a newspaper hacker to fulfill his unfulfilled desires. Many construction houses have harassed the producer to give him a chance to sing on any album. But most disappointed. Eventually the lack of family forced him to become homeless. After Birah returned to the village, Duleshwar now looks after his mother as a golden son by hiring a coolie in the village.
The liquor dealers are being beaten, the liquor dealers are being respected. The poor are not allowed to eat, the rich are being brought in from abroad by plane. “If there is no money to feed the poor, how much is it going to cost during the elections?”

The rapper of ‘Desi Gali Boy’ has attracted the attention of the entire country. Many users tweeted that even if they don’t understand the language, everything is understood by emotion. No complaints, no ideas, no protests. Naked images of government negligence brought to the fore. Dadan apologized and asked the government for an answer.

And Rap is also in his own language. This Oriya youth has become a focal point of attraction not only in the state but across the country. One of the rapists, who lives in Kalahandi, is Dule Rokar, 28, of Duleshwar Tandi alias rap. Duleshwar’s talent is now the talk of the country. Duleshwar’s talents, including in Odisha, have become a hot topic in the country. Bollywood stars, including Odisha, have praised Duleshwar. Her rap has attracted a lot of great music directors, singers, singers and actresses. Duleshwar is being hailed on Twitter. Artists like Swara Bhaskar, Richa Chadha and Vishal Dadlani have praised Duleshwar’s rap. Even Bollywood’s renowned music director and singer Vishal has promised to help as she raps in her future.

He told Duleshwar that if he needed any help, he would provide it. However, Duleshwar’s rap is not only in the Koshli language. He has also raped in English and Hindi. But the most praised is the rapper who sang recently in the Kosli language. In it, he targets the Odisha government. He spoke in support of the US Alliance, but said that maintaining some independence was important. He asked why pregnant women and migrant workers are spending their days in misery, hardship and pain despite various plans. The government has announced that hundreds of thousands of pregnant women will be able to walk for hundreds of kilometers. Politicians, government officials only show up during elections. The rest of the time, he wears suits and boots and sits on his balcony. Government money is being looted in the name of the people. They have learned to cheat. Disobedience to the government is well known. Here are some of the ones I found to be interesting: The poor are not allowed to eat, the rich are being brought in from abroad by plane. “If there is no money to feed the poor, then how much is it going to cost during the election?”