Bhubaneswar: Corona  infection rate  in Odisha is lower than in the country. At the national level, the infection rate in Delhi is 11 per cent, in Tamil Nadu it is 9 per cent and in Odisha it is 1.08 per cent. This is due to the fact that the people of Odisha fllow to the lockdown more strictly than the rest of the state. Similarly, due to the strong decision of Odisha Chief Minister Naveen Patnaik and the strong support of the people of the state, Odisha is ahead of other states in the fight against corona.

This was stated by Shalini Pandit, Director, National Health Mission, at a press conference at Gitagobind Sadan. “The people of the state have complied with the lockdown rules,” he said. We have benefited from this. Not to be outdone, we have to completely eliminate the corona infection trend. 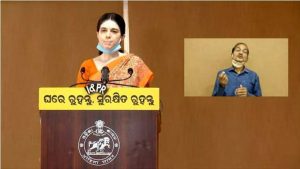 “Our population is four and a half crore,” he said. But we have very few positives in terms of population. So far, about 5,500 corona samples have been tested in the state and only 60 cases have been identified. Approximately 11 per cent of the samples tested in the national capital New Delhi and 9 per cent in Tamil Nadu were positive, while in India it was on average 5 per cent. But in Odisha, the number of positives per 100 sample tests is only 1.08 per cent. This means that 1.08 percent of the 100 people tested tested for coronary heart disease. “The state government is testing the corona in every district,” she said. There have been about 200 Tests in Malkangiri, Balangir and Kalahandi. The people of Odisha have complied with the lockdown rules. “People are worried about their families.

“The infection must be completely eradicated,” she said. “Everyone needs to think about how the 80 infections happened and how we survived.” That’s why keeping a social distance. Wearing a mask when you go out. When you come outside, wash your hands first. Be prepared for sample testing. The state government has begun extensive preparations for the Covid-16. “Now that the Karona war is over, we will win,” he said.

Read, what the government say on uncertainty of puri ratha yatra due to corona.