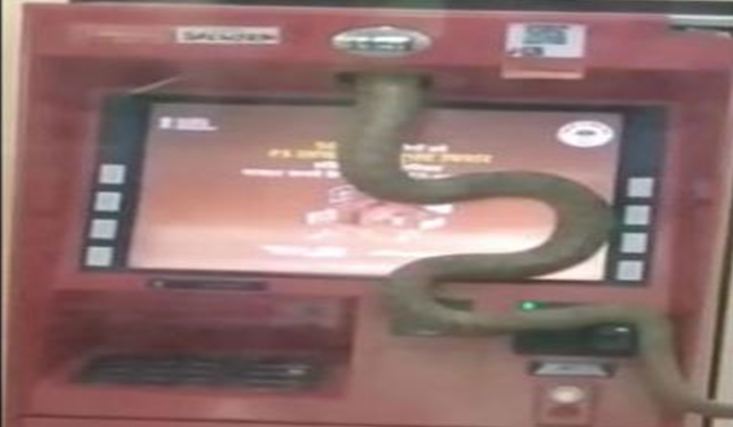 Snake came out while withdrawing money from ATM ,Watch video

New Delhi: Snake came out while withdrawing money from ATM  . A cockroach scare was reported among people who went to an ATM in Ghaziabad near Delhi to withdraw money. He was found hanging from a large dragon on an ATM machine.
A man went to the ICICI Bank ATM in J-Block 9 Bazaar near Dehradun Public School in Gobindpuri, Ghaziabad to withdraw money. As he opened the door of the room with the ATM machine, he saw a 6-foot-long snake hanging in the ATM machine there. Seeing the snake, he was completely frightened and ran away from there, telling the security guards and other people outside about the incident.

Knowing that there was a snake inside the ATM, the security guards on the outside immediately closed the door of the ATM. The snake snuck into the ATM and then into the machine. A video of it has gone viral on social media. People call this snake a snake.
People outside the ATM captured the video of the incident on their phones. It later went viral. Fortunately the snake did no harm to anyone. People reported the snake to the forest department as there were snakes in the ATM. Upon hearing the news, the snake owner arrived at the scene and, after several attempts, safely pulled the snake out of the ATM4 machine. .

School will reopen on June 17 In Odd Even Formula !

Ranbir will again romance with his ex-girlfriend !