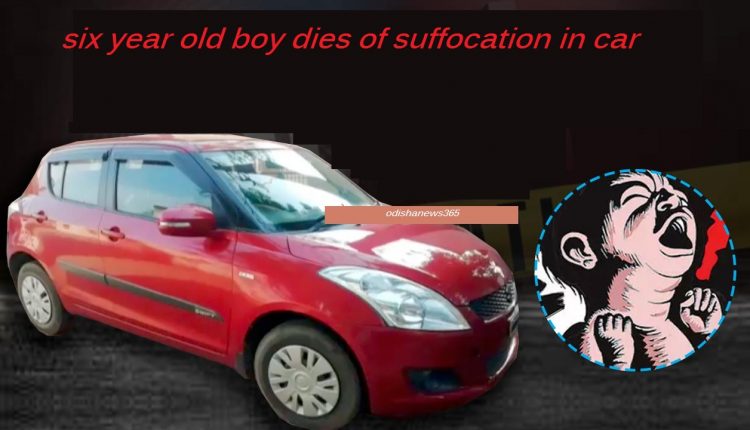 Bhanjanagar: six year old boy dies of suffocation in car . Death still comes. A gentle 6-year-old boy has died of his ignorance. A similar tragedy took place in Halandkhola village under Ganjam district’s Tarsingh police station. This unfortunate incident has stunned the entire village. While playing around the house in a fun way, life is lost for its own small mistakes. A 7-year-old boy has been found dead in a car after suffocating himself.

According to sources, Sunita, wife of Vikram Pradhan of Pathrapalli village in Jagannath Prasad block, Pratapur panchayat, and son Saikrishna Pradhan, 6, had gone to Halandakhola village to attend the Dashah function of a relative. There, while everyone was busy doing Dashah work at home this afternoon, Sai got into a car near the house. After playing for a while, he tried hard to get out.
So he could not get himself out of the car as he did not know how to get himself out of the car. Sai tried to get rid of it, but could not find it. As the car was completely locked, it was running low on oxygen. Inside, Sai fainted, unconscious. Relatives, including Sai’s mother Namita, had been searching for him in various parts of the village for a long time. After much searching, Sai was found lying in the car in front of the house.

He was rushed to a hospital in Bhanjanagar. Here the doctor pronounced Sai dead. Tarsingh police then confiscated the body and filed an inquest. “The body was sent for autopsy,” said Sabyasachi Mall, a Tarsingh police officer. Now, with Sai’s father trapped in Surat, the mother is devastated by the untimely death of her 4-year-old son. The family burst into tears as the hospital burst into tears. The tragic news has created a mournful atmosphere in the Bhanjanagar area.