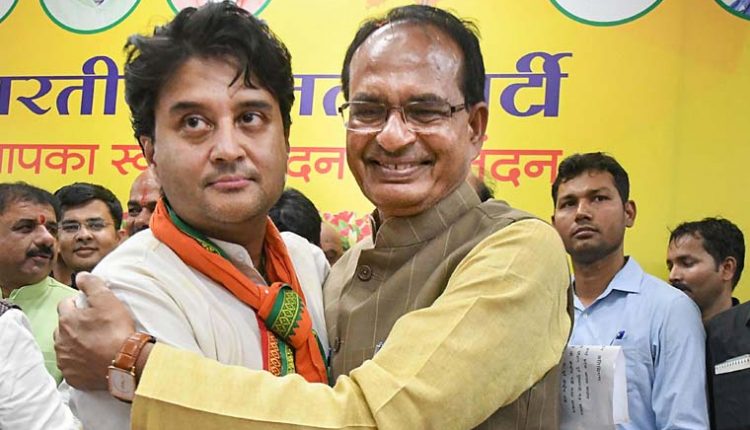 Shivraj’s cabinet to be formed this week: Scindia’s 10 leaders will be ministers !

Bhopal : Chief Minister Shivraj Singh Chouhan’s cabinet is likely to be sworn in this week. On Monday, the chief minister informed that the first phase of the lockdown ends on Tuesday Now the minister can be sworn in in consultation with senior party leaders Shivraj Singh Chouhan’s cabinet is likely to have 10 supporters of Jyotiraditya Scindia as ministers. Twenty-four leaders may be sworn in as ministers Jyotiraditya Scindia joined the BJP on March 10 In support of Scindia, 22 legislators resigned from the Congress Earlier, four supporters of Scindia were appointed to the Kamal Nath cabinet

Chief Minister Shivraj Singh Chouhan was sworn in on March 23 after the Kamal Nath government collapsed on March 20. For the first time in the history of the state, no chief minister has been in office for so long Former Chief Minister Kalamnath on Sunday slammed it, saying, “How can a cabinet where there is no health minister in times of crisis? Apart from Tulsi Silabat, Imrati Devi, Pradyumna Singh Tomar, Mahendra Singh Sisodia, Prabhuram Chowdhury, Govind Singh Rajput, Endal Singh Kansana and Hardeep Singh Dang, Rajvardhan Singh Dutt and Bisahu Lal Singh, who left the Congress, can be made ministers. The remaining 12 MLAs who left the Congress and joined the BJP are also likely to be submitted to the corporation council.

The cabinet can have 35 ministers, including the chief minister If 10 of Scindia’s supporters are made ministers, out of the 24 who will be sworn in, the BJP will select the candidates from its legislative constituency in the remaining 14 seats. The election is the biggest warning for these 19 people Because there are so many candidates for the ministry Under Shivraj Singh’s new government, the main task is to maintain social equality and regional balance At the regional level, it is likely to represent ministers of all sections of the state in the state, as well as losses, Brahmins, backward classes, Scheduled Castes and Scheduled Tribes, and tribal societies at the level of social equality.

Sonakshi Sinha is having an affair with Zaheer Iqbal !

Find out List which books in 10th Class have changed