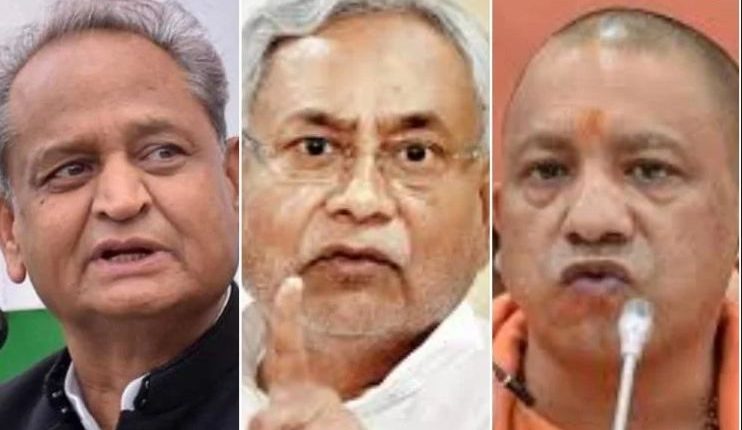 Kota is now the hotspot of politics : Gehlot-Yogi-Nitish face to face

New Delhi: The city of Kota, Rajasthan, has become a hotbed of politics amid the Corona epidemic. Politics is in full swing with the return of students from the quota paid to the country by a large number of doctors and engineers. Bihar Chief Minister Nitish Kumar, Uttar Pradesh Chief Minister Yogi Adityanath and Rajasthan Chief Minister Ashok Gehlot have been angry over the return of about 35,000 students to their homes. The Uttar Pradesh government has sent a bus to Kota after the students launched a vigorous campaign on social media to return to their respective states. However, the Bihar chief minister has opposed the use of hundreds of buses during the lockdown. “It simply came to our notice then.

Kota has 7,500 students in UP and 6,500 students in Bihar. Most of the students live in the hostel of the Coaching Institute. They feel lonely with their food problems during the lockdown. Students in Bihar have backed the UP government since it began bringing in students, and the Bihar government has demanded immediate arrangements to send them home. BSP supremo Mayawati Yogi praised the government’s move. While the Rajasthan Chief Minister has already backed Yogi’s move, Nitish’s audacity is on the rise. Opposition leader Tejaswi Yadav has lashed out at the Nitish government over the case. Tejaswi said the government was “extremely insensitive” to migrant workers and students. Yogi, on the other hand, has implemented a plan to bring in students without bowing to the Bihar chief minister’s opposition.

61 corona Posative in Odisha : Find out which district patient now recovered from covid-19