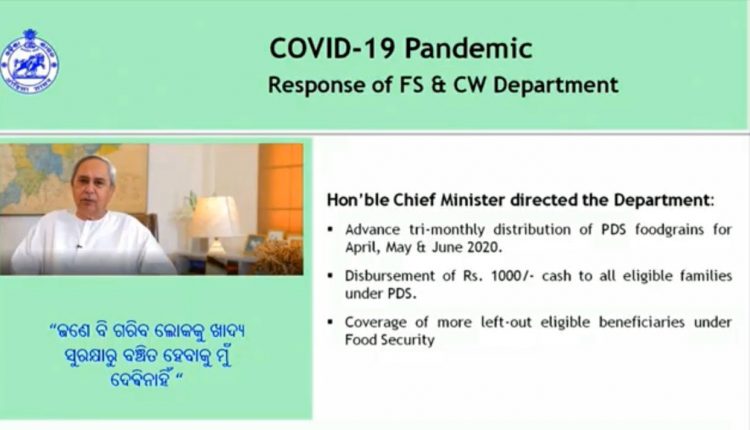 Bhubaneswar: People of Odisha are leading the way of Lockdown. Eighty-five percent of the state’s population is satisfied with the government’s lockdown. Eighty-five percent of the state’s population supports the government’s move. The Odisha government has also done a good job across the country in strictly adhering to the lockdown. Lockdown is strictly observed in the state. In addition, 90 per cent of the people in the state have voted in favor of the state government’s lockdown period, while the country’s lockdown period has been extended. This is according to a national survey conducted by Jan Ki Baat. The survey report praised the steps taken by Chief Minister Nanveen Patnaik and the support of the people of Odisha over the fight against Corona across the country.

As the first state in Odisha, Lockdown has been extended to April 30. This was announced by Chief Minister Naveen Patnaik on the 9th. However, most of the people of Odisha have supported Naveen’s announcement.

A total of 85 percent of the state’s population welcomes Lockdown. However, Lockdown was supported by only 34 percent of West Bengal residents. In Odisha, the lockdown was strictly observed, while in West Bengal, alcohol was found. The report was published in the John Keywords Survey.

In addition, 90 per cent of the people of Odisha are in favor of lockdown growth across the country. Similarly, a total of 7 percent of the population said that the lockdown in the country should be increased to prevent the spread of coronavirus.

One of the questions the Survey asked was “How has been the performance of your state government to COVID19?” In response to this question, the Odisha Government received the highest people satisfaction rating (85%) in the country. Odisha was also seen having a strict lockdown which is perceived as extremely positive, and reflects in the Survey’s findings. It reflects how people of Odisha are highly satisfied with the good work undertaken by Hon’ble Chief Minister Shri. Naveen Patnaik and Odisha Government in combating COVID-19.
Headed by Shri. Pradeep Bhandari, Founder, CEO, Editor & Chief of Jan Ki Baat, the Survey this survey was held from 6th to 10th April, 2020 and has been conducted via Phone interviews by the Jan Ki Baat verified citizen reporter model present across the country.
1. The Odisha Government has been undertaking proactive steps in combating COVID 19.
2. It was the first state in the country to go for a lockdown of about 40% of Odisha from 22nd March, 2020 for one week till 29th March, 2020 in order to flatten the curve of the Corona pandemic and also increased testing.
3. Odisha is also the first state to extend the lockdown till 30th April, 2020 while the Centre and other states were contemplating.
4. It is also the first state to make usage of masks compulsory and also the first state to launch 1000-bedded stand-alone COVID Hospitals which will increase to more than 6000-bedded facility and many more COVID exclusive Hospitals by end of April, 2020.
5. From being the first mover in ensuring a high percentage of patient recoveries as compared to confirmed COVID patients, it recorded an impressive recovery rate of about one-fourth of the total COVID patients recovered, totaling 10 recoveries in only one day.
6. It is also the only State who made it mandatory for all foreign returnees to register and be in home quarantine with an incentive of Rs 15000 per person who registered.
7. Odisha is also the first and only state to give 4 months advance salary to all healthcare staff.
8. Its also only State who provided 4 month’s advance pension to old and physically challenges, 4 months scholarships to students in advance and 3 month’s rice through PDS in advance.

A newborn baby girl was rescued from a roadside in Cuttack