Ganjam: Stone quarry collapsed Three death in Ganjam . An incident took place at a stone quarry near Bhatkumarda village under Ganjam district’s Purushottampur police station. Three workers were killed in what became known as the Cold War. The dead workers were identified as two women and a man. Bhakta Parida of Bikrampur village in Khallikot and two women Namita Nayak and Pankaj Das of Tanganapalli village on the outskirts of Berhampur. 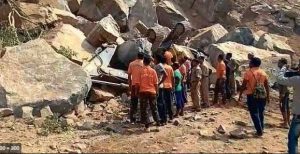 This afternoon, while working in a stone quarry, mud and stones suddenly fell from above. He was crushed to death by workers on the ground. Purushottampur police reached the spot, recovered the body and sent it for autopsy. Police are investigating.

Work from home Period increased till July 31st in India