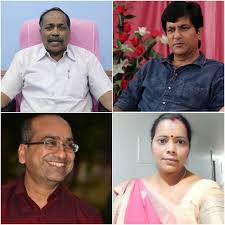 New Delhi: Four Rajya Sabha members of the BJP, who were unanimously elected, could not be sworn in. Newly-elected Rajya Sabha members no longer need to be sworn in as a lockdown has been declared in the country over Karona. This was stated in a statement from the Rajya Sabha Speaker’s Office on the swearing-in of new members.
The guidelines make it clear that the Rajya Sabha or any of its committees is unlikely to convene in the country in the event of a lockdown and the closure of the lockdown. Therefore, new members are expected to take the oath of office until the end of the lockdown period. On the other hand, the swearing-in of new members of the Rajya Sabha does not stipulate in the constitution. Parliament is still closed. However, it is stated that since the announcement of the election, they will be able to avail the necessary facilities as members.

There will be zero tolerance on violation of social distancing-CM