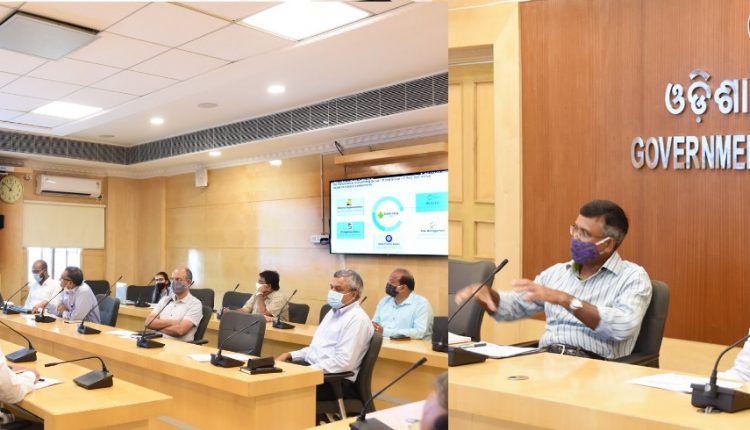 Bhubaneswar: Chief Secretary Asit Tripathy directed the OPTCL, GRIDCO and Distribution Companies (DISCOMs) to make the power sector self sustaining through aggressive system reform and reduction in aggregate technical & commercial (AT&C) loss. Sri Tripathy gave this direction while reviewing the Covid-19 impact and current challenges in the power sector of the Odisha in a high level meeting held digitally on OSWAN Platform last evening. Power companies of the State  were asked to work out their own ‘way forward’ specifying the deliverables with timeline.

Further, Chief Secretary Sri Tripathy directed OPTCL and DISCOMs to improve quality and reliability of power supply by optimizing the use of the existing network. Sri Tripathy said, “assurance of quality supply will prompt the industries to source power from GRIDCO than that of installing their own capital intensive captive plants”.  He directed the department of Industry to motivate the industrial units to procure power from GRIDCO.

Outlining the Covid impact and current challenges, Principal Secretary Energy Sri Nikunjabihari Dhal presented the framework for ‘way ahead’. Sri Dhal appraised, “The installed power generation capacity of Odisha is around 7.15 GW including 2.13 GW from hydro, 4.36 GW from thermal and 0.66 GW from renewable sources. Besides, various industrial houses have also installed captive plants with capacity of around 9.85 GW. Sri Dhal added, “With continued Government support, the power infrastructure has been enhanced substantially over the years. The EHT line has been increased from 8,267 circuit Kms in the year 2000 to 14,373 circuit Kms in 2020. During the same time the number of EHT GRID substations and 33/11 KV substations have been increased from 61 to 156 and 550 to 919 respectively. The HT line has been extended from 60,100 kms to 1,58,445 kms; and, the LT line has been increased from 54,160 KMs to 1,84,010 kms during the same period”.

Principal Secretary and CMD GRIDCO Sri Saurabh Garg said, “Presently the outreach of power distribution has been extended to 89 lakh consumers in current year against 16 lakh consumers in the year 2000. The percentage of AT & C loss has been reduced from 57% to around 29.94% during the period. The State has power surplus of around 1000 MW per year”.

Director Finance GRIDCO Sri Gagan Swain appraised, “The current power tariff of Odisha for agriculture, domestic industrial and commercial use is lower than many states like Andhra Pradesh, Bihar, Karnataka, Jharkhand, Madhya Pradesh, West Bengal, Uttar Pradesh and others. Currently, power supply in Odisha is subsidized for domestic and agricultural use.

Review show, Covid-19 has impacted the power sector adversely. Because of the shutdown and lockdowns, the power demand has reduced by 14% during the period from March-June 2020 in comparison to the previous year. The captive generation and consumption has also reduced by 25% in April, 12% in May and 2% in June. Because of the reduction in demand, the revenue gap of GRIDCO has widened, as it has to pay the fixed charges to power generating plants as per power purchase agreement.

The meeting decided to extend necessary financial guarantee support to GRIDCO as power is a critical basic need. Development Commissioner Sri Suresh Chandra Mohapatra advised the department to redesign its investment in renewable power sector keeping in view the low cost availability of renewable energy from interstate market. Chief Secretary Sri Tripathy directed to optimize the use of existing networks, increase metering, billing and collection efficiency. DISCOMs were directed to achieve at least 98% of the billing and collection capacity during this year. Chief Secretary directed to focus on reduction of AT& C loss, as reduction of 1% AT&C loss leads to around Rs.130 cr of revenue gain. OPTCL and GRIDCO were asked to reduce their operation cost through adoption of innovative techno based approaches.