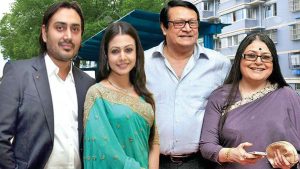 Ranjit, Koel and his family members have been suffering from coronary symptoms for the past two weeks. He had dry coughs and difficulty breathing. His family submitted their samples to the laboratory without delay, and his report arrived on Friday. Following the word of this case being spread on the Internet, Coyle Mallick tweeted to his fans and celebrities. He said they were found to be infected with Covid-16 and are now in self-quarantine.

Coyle gave birth to a son in May. After the delivery, he stayed with his parents. He tweeted about it. “We have new guests here,” he wrote. We want to share our happiness with you and your blessings for your son. ‘
Koel Mallick is best known for his performances in films such as “End of the House”, “Shadow and Chhobi”, “Shubhodrishti” and “Hemlock Society”. Koyal Mallick is a well-known actress in Bengali cinema.