Registration is mandatory for returning to Odisha

state government will take responsibility for all

Bhubaneswar:  State government is planning to bring in Odias  from other states. But registration is mandatory for returning to Odisha  , whether online or offline, before returning to their hometowns. The state government is set to open a portal. It will be operational soon. This was informed by DK Singh, Principal Secretary, Panchayat Raj, State Government. Speaking at a press conference at the Gitagobind House, Mr Singh said the state government’s portal would be operational from April 24 (Friday). 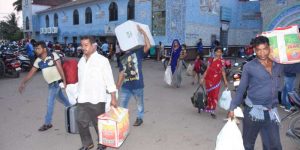 “Today was a historic meeting with the sarpanches through video conferencing,” he said. In it, the Chief Minister held direct talks with the Sarpanches. The meeting was also attended by the district commissioner, SDP and other officials. “There are about 750,000 Oriya brothers and sisters in the out-of-state,” he said. They are anxious to return home after the lockdown.

Registration is mandatory for returning to the state, and the state government will take responsibility for all